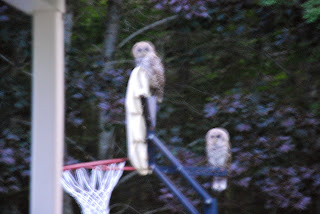 Barred Owls on the Ridge

I had been up early and then fell asleep on the couch.

A strange sound outside stirred me.

As the day unfolded, I forgot about it.

Tonight, as it was getting dark, the sound came back over and over.

I was a little leery about figuring out what it was!

Finally, I got Jim to come to the porch.

To our right, there were two owls sitting on the basketball hoop.

A third was to our left in the trees.

They sat there and appeared to just be looking at us from the hoop.

I kept saying, "Jim, they're looking at us!"

His reply, "It's probably because you are freaking out!"

I was a little scared and excited!

(My dad had just shared some old stories about Grammie's superstitions with birds years ago...and told of stories that came true. So I called him saying, "Oh my goodness! What do THREE owls mean?"  He laughed!)

We watched them sit and fly around the front yard.

Eventually, they flew into the big trees across the road.

We thought they were gone and settled down to watch television.

And they are still here hours later making their sounds and flying around in the dark!

We discovered our owls are barred owls. From what we read, they are fledglings. The sound they make is exactly like the fledgling begging call on All About Birds.

It was amazing to see three owls just beyond our screen door. 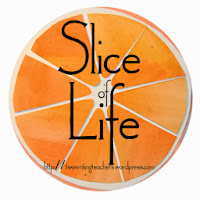 Email ThisBlogThis!Share to TwitterShare to FacebookShare to Pinterest
Labels: Family, Slice of Life